This reaction piece to the Wednesday night debate struck me as the most perceptive critique:

Mitt can abandon some of the positions he espoused to win the nomination, but that doesn't matter as long as he kicks Obama's ass in the debates. The debates have been cherished opportunity that conservatives have have been anticipating for the entire primary and campaign season. I've read thousands of comments declaring that this or that candidate would absolutely murder Obama, or drive a stake through his socialist heart in the debates. Commenters declared that about Michele Bachmann, Herman Cain, but especially Newt Gingrich.

To everyone's amazement, it was Romney delivering those sweet jabs and hard right punches. The Atlantic article covers the bases, with more "before-and-after" quotes than I'd research. It's a good read. However, I don't trust the word of the too-biased Atlantic Wire, so I did a bit of research at HotAir.

Out of the first 100 or so comments, only one person noticed the lack of conservative bedrock in what Romney said:


I didn’t hear any of these things from Romney last night:
- “Government as a whole is too big.” To be fair, I did hear “Parts of government are too big.”
- “Taxes are too high.” Romney was all about “revenue-neutrality” and “soaking the rich by taking away their deductions and only their deductions”.
- “We need to make sure a sizable majority, or at least a majority, of income-earners pay at least some income tax.” -- HotAir comment

So, in the primary for the GOP nomination, moderation is poison. In these debates, however, you can be moderate so long as you still make Obama look bad.

Hot damn, I know how to attack Obama really well--my one, two punch, for example. Can I be a conservative hero too? 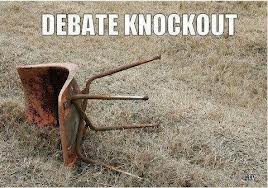 Awkward admission: I haven't watched the debate yet. A new assignment at work is eating too many of my waking hours. Watching the debate on my to-do list for the weekend, and I'll probably post an impression.

Posted by ModeratePoli at 9:06 PM