Short: Romney shifts with the wind on taxes

Five weeks before the election, Romney is releasing a few hints about what his tax plan might be. Just maybe he's for capping tax deductions at $17,000.

Or maybe it's a trial balloon and an attempt to nudge his poll numbers up. [Picture me rolling my eyes over yet another Romney proposal that might be walked back tomorrow.] Yeah, sure, Mitt, you're a strong leader with strong principles, which is why this is a tentative proposal that's coming five weeks before the election when you're down in the polls. My favorite word for this is: LAME. 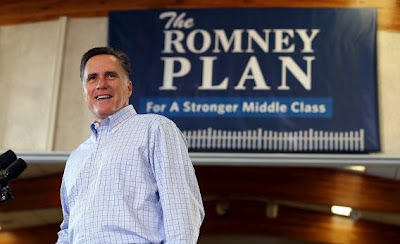 This week's plan is...
Image: slate.com
Posted by ModeratePoli at 12:09 AM

He'll walk it back, and it's still not specific enough. I buy my own health insurance, take a mortgage interest deduction, pay state income tax and local real estate taxes, and contribute to charities, and my middle-class deductions total about $30K. A 20% rate cut would hardly make up for that, so my taxes would certainly go up, since 13K extra at the marginal rate is more than my reduction for the other income.

My guess is this is NOT revenue-neutral. Except, perhaps, for the charitable deduction and state income taxes, wealthy people don't have nearly as much in deductions relative to their income, but they will get a 20% across the board cut in rates.

Romney has given several teasers about what he would do about tax reform, but what seems most likely is that he'll bend to the Congress and let them write the tax reform legislation. I don't want the crazy House GOP doing that, so there's no way I'm voting for Mitt.