Lying his way to the White House

I'm amazed that Romney is so close to winning the election in 3.5 weeks. The turning point was the first debate, and the change was more due to a strong Romney performance. To many liberals, Romney is getting too damn close to a huge win for a huge liar.


Romney of the debates

To conservatives, debate was vindication that Romney could do what Reagan did in 1980. In that debate, also against a sitting president, Reagan showed that he wasn't a warmongering, jingoistic John Birch type, and he went on a landslide election.

Romney's performance isn't a sure repeat of 1980, but he made a hell of a lot of progress in that direction. Romney the debater said President Romney wouldn't raise the deficit through tax cuts--definitely not, not 'maybe not.' He would not be a slash-and-burn president on the federal government, unlike the terrifying impression most Tea Party adherents have projected. This reassuring performance, more than Obama's lackluster one, helped Romney in the polls.

The debate probably wouldn't have salvaged Romney's campaign if he had delivered these talking points from his CPAC 2012 speech:


[In Massachusetts] if there was a program, an agency, or a department that needed cutting, we cut it.  In fact, a commentator once said that I didn’t just go after the sacred cows, I went after the whole herd.  And I can’t wait to get my hands on Washington... I will dramatically reduce the size of the federal workforce.

In their current form, Social Security and Medicare are unsustainable... When it comes to Medicare, tomorrow's seniors should have the freedom to choose between traditional Medicare and a range of private plans. If these future seniors choose a more expensive plan, they would bear the additional cost.

Mine will be a pro-life presidency. I will ensure that organizations like Planned Parenthood get no federal support... I fought for abstinence education in our public schools.

I pushed for a stay of the [same-sex marriage] decision, fought for a marriage amendment to our constitution... On my watch, we fought hard and prevented Massachusetts from becoming the Las Vegas of gay marriage. When I am President... I will fight for a federal amendment defining marriage as a relationship between one man and one woman.

There are those who say you can’t talk straight to the American people on these key issues and still win an election. I say we can, we must, and I will!

So the Romney of the debate was not the Romney of CPAC 2012. Well, that's no surprise, because that speech was delivered during a hard-fought primary against more conservative contenders. Does this mean that Romney is the biggest liar who might end up as president?


May the best one win

I'm not going to judge who's the biggest liar because it's always a matter of degree of falsehood, something for which we don't have a scientific measure. Most people blast the lies of the other side, and give their side a pass. You aren't impartial either, so don't trust yourself to judge who is the worse liar. I will, however, point out what Romney said and didn't say.

I notice one interesting parallel. I wonder if Obama won the Democratic nomination in 2008 because he was a better liar than Hillary. How ironic if Obama now loses to Romney because Romney can shift his positions more suavely than Obama can.

Perhaps this is our pattern for the future--our president will be the person who is most adept at obscuring what they've done and what they plan to do while pleasingly speaking lovely words. But that's nothing new. "He lied his way to office" is something we hear every presidential election. This year may be a change in degree or brazenness, or it may be more of the same. Presidential campaigns aren't for the scrupulously honest. 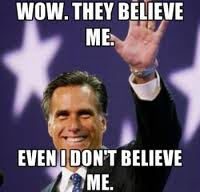