Candidate Romney has me confused, and not for the first time. During the campaign he was pushed (by the necessity of matching Perry's proposal) to declare a tax rate reduction of 20%. As someone who can actually do math (unlike Perry), Romney hinted that the rate reduction would be offset by allowing fewer deductions, but he was careful not to be specific. He has dutifully remained vague.

In the debate, Romney forcefully declared that this tax cut wouldn't raise the deficit. That sounds so clear and definite. . . until you ask how.Since Romney didn't explain at the debate or in news clips since, I decided to look at his website. This is what I found:
How does this square with his no deficit-blow-up pledge? I wanted to find out, so I went his nine-page tax policy document and found these statements:

In the long run, Mitt Romney will pursue a conservative overhaul of the tax system that includes lower and flatter rates on a broader tax base.

It turns out that Mitt's tax policy paper contradicts his website on the 20% rate cut, and then gives no numbers on eventual lower tax rates.

I wish I could bring together a bunch of clips of all the positions Romney has taken on taxes, just to prove that he's had no consistency on the issue. Maybe the Obama campaign or a helpful superPAC will do it for me.

By the way, Romney is much less vague on what he'll do about corporate taxes. I guess corporations are more important than people, but unfortunately they don't get to vote. 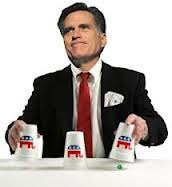 Where, oh where, is the tax policy?
Image: desertbeacon.wordpress.com

Update 10/10/12. Normally, I'd think someone, either a journalist or a debate moderator or the confused public, would force Romney to clarify his tax plan, or least the priorities. However, it's been a week after the debate, and no one has yet cornered Romney into explaining if he's backing away from his 20% tax rate cut.
Posted by ModeratePoli at 3:35 PM