Short: A tragedy in NYC

A nanny became deranged and stabbed two children, killing them. On the surface, it is a mystery why she did it. However, the New York Times article captured some fascinating details, especially the contrast in the living conditions of the wealthy family versus that of the nanny.

As a scientist who has also studied a bit of sociology and came away thinking that it was much more than just polemical trash, I appreciate the descriptions of the nanny's living conditions: she earned extra money selling cheap jewelry door to door; she started behaving strangely after her dream of having her own apartment was shattered.

In contrast to her struggle is her employers' wealth, but also their reserve. Only one neighbor in the building was quoted, and she didn't even know the children's names. I'm not trying to hint that there is some sort of cosmic justice in this tragedy, because killing innocent children is not just. But I sense something about the rich and the poor--I'm just not sure what it is. 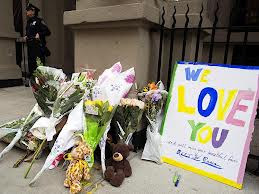