A sensible endorsement of Romney

The Des Moines Register has the best rationale for voting for Romney that I've read. Some of their arguments:
The editorial has a mostly accurate critique on Obama's shortcomings. It isn't nearly as strong on its critique of Romney--they are giving him a generous benefit-of-the-doubt. The editors accept Romney's five-point economic plan at face value, which is an abdication of their responsibility to drill down and see if the plan holds up.

I can't be that generous to Romney. He owes his nomination to his fairly hard-right positions. If Romney becomes president there will be little holding him to his late arrival to moderation, and many Republicans pushing him to the right. I'm not going to take that chance. The argument that a nearly 50-50 Senate will be enough to keep him moderate is weak and could fray in the next election.

As I've said before, I'd prefer sworn enemies among the Dems and Repubs forced to negotiate than take my chances with one party rule. It still looks like the least risky scenario. So that's my endorsement of Obama--he's not great, but it's less of a risk. 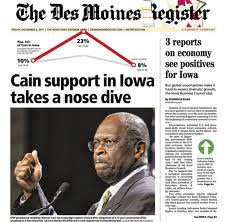 I was the DMR editor on MS-NBC midday yesterday -- while hunkering down against Sandy -- and he couldn't answer ANY questions straight on why they endorsed Romney!! It was a lot of "it was an extensive process with a lot of deliberation" kind of answers, without highlighting anything about Romney or his plans that they could get behind. Hence, I suspect it was a lot of anybody-but-Obama-because-he-disappointed-us endorsement. In other words, they have bought the GOP master plan of attack that the weak recovery is all Obama's fault.

This is not to say that Obama should be blameless, because he allowed the GOP to play those games and score with that narrative repeated again and again. I doubt the DMR endorsement will matter, though. Obama is weel ahead in early voting, which is substantial, and newspaper endorsements rarely matter, especially one as weak as DMR's. It was just the man-bites-dog aspect of it that garnered attention since they haven't endorsed a Republican since Nixon in '72!! See how that turned out.

So the DMR was weasly about their endorsement. Well, they should be because they did maybe 60% of the job they should do, and mentioned the weaknesses in Romney.

Thanks for pointing out their run of Dem endorsements. Maybe they were itching to show that they could endorse a Repub, and they missed their best chance back in the 80's. Maybe I'll check back on them in a decade and see if there's a new pattern (or just chaos.)