Romney shuns the right flank of his party?

Romney was sounding like a level-headed moderate in the debate last week. His conservative supporters, far from panicking, rejoiced, though more over his strength and steadiness than over the content of what he said. Let's just review a few things he said:
Consider the conservative orthodoxies that he didn't talk about:
These orthodoxies he did affirm:


Romney the moderate?
If Romney is able to turn around his campaign on this platform, he won't owe very much to the right flank of his party since he will have won based on a much more moderate version of GOP conservatism.

That doesn't mean that the GOP right flank will acknowledge this change or the debt that they would owe the more moderate Romney should he win. It also doesn't mean that Romney will govern this way once in office. Bush, "the compassionate conservative" changed almost immediately. Obama couldn't or didn't enforce the transparency and bipartisanship he promised.

Romney's change in tone during the debate doesn't guarantee anything. The only real change is a change in possibility-- Romney has shown that moderation has some power to influence opinion. Actual governing is much trickier, as every president finds out. 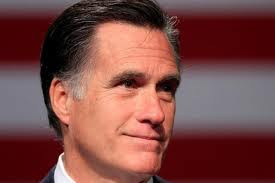 Romney 5.0: No longer the severe conservative
Image: washingtontimes.com
Just to be clear, I used to think Romney was a moderate, but not after the entire primary season and this summer. I am thoroughly disabused of that thought. He's no moderate by ideals, but he plays one when it's opportune.
Posted by ModeratePoli at 10:14 PM