Nate Silver has been the conservative media's favorite pincushion lately, maybe even more than Obama himself. Here's the article where some blowhard decided that attacking Silver's build and vocal pitch was a good lead-in for complaints about his methods.

Of course, complaints about the methods are just a gloss over the real problem--his results. Until Romney's uptick in most polls after the first debate, conservatives were complaining about almost all the polls. I thought I was late covering the issue earlier this month, but the conservative jerks are giving us a second act now. This election can't come soon enough because I AM FUCKING TIRED OF THE STUPIDITY.

I'll be checking back on this issue and holding the predictions against reality, as any good scientist would. (Yes, scientists also swear.) 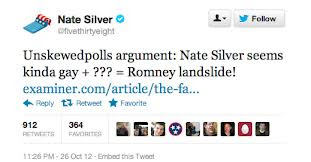 Update 11/5/12. It turns out that my rage at the stupidity lasted only until the weekend. This past weekend and today I've been the soul of equanimity. Tomorrow is the big day, the turning point of American civilization according to some. I'm both more cynical and more hopeful than to believe that. See you down the rabbit hole!

Post-election update. Here's my round-up on how the polls did.
Posted by ModeratePoli at 8:45 PM

How DARE Nate use math. Math doesn't count!! It's only the narrative that matters, and one that we want to hear.

I suspect Nate doesn't mind and likes the attention. If you listen to his attackers, Romney is way ahead and is going to win by a landslide because:

a) Undecideds always break against the incumbent. Why? Because they know the incumbent well and if they haven't decided to vote for him yet, they aren't going to.

b) Romney = Reagan and Obama - Carter. Reagan won big in the end over Carter and that's what will happen this time.

c) The polls are skewed because they oversample Democrats. Only Rasmussen is right becuause he balances the party ID almost even.

I won't bother debunking each of these since Nate Silver already has -- using MATH. Yet, if these guys win, they will govern the same way: story over fact; conjecture over reason. Not a pleasant prospect.

I'm sticking with Nate until there's some new evidence.