You might think that this will be another screed about Romney's vagueness. Well, not this time for a refreshing change. The culprit for this post is President Obama. Specifically, this line during the Oct. 22 debate:


"First of all, the sequester is not something I proposed, it's something that Congress proposed. It will not happen."

Whoa. If the sequester will not happen, what will?

That's a huge statement with no clarification of what he means by it. And Obama seems to have gotten away with it... as he should considering the precedent set by Romney and his definitive statements about the deficit and cutting government by attrition during the first debate. Romney was been getting away with not explaining these claims and for the lack of detail his tax plan and his economic growth plan. So it's only fair that Obama gets a pass on his sequester claim.

Do I need Obama to be anymore specific than that? Not really. By now I generally know his bargaining position. Getting too detailed could cost him some votes that he'll need, and Lord knows neither candidate is going to blow those votes at this point. Not Romney, not Obama. This doesn't make them equivalent in their vagueness, but it levels the playing field a bit. 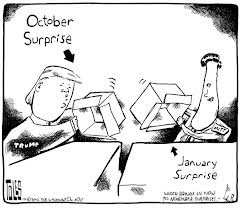 I looked at this blog, and it's not one I would follow. It's dogmatic and poorly written for a general audience. I don't think Steve will be following me--this is basically spam.