This is a perennial favorite in election years. If we could only eliminate the stupid voters, we'd have much better elections. The latest stupid voter is presented in a video where she declares she'll vote for Obama because he gave her a cell phone.

"Typical Stupid Voter for X"
Some people claim that this woman is a "typical Obama voter" but I doubt that so highly that I'd love to place a large bet on it. I doubt that 50% of Obama voters got free cell phones... or food stamps or housing vouchers. You can't win state-wide or nation-wide elections on a give-away platform in this country. However, a talking point for conservatives is the 47% vs the 53%. If you believe that the 47% automatically vote for Obama, all you have to add is 3.1% of self-supporting stupid liberals, and you (Obama and other liberals) are a winner. If this was true, it should scare the crap out of conservatives because those are hard numbers to defy. However, the GOP doesn't act overly scared about these demographics, so maybe they know that this talking point is an exaggeration.

But I digress. The point I want to make about stupid voters is that they are a strawman argument. It's so easy to find a picture or video of a stupid voter, then blast the strawman emblem you selected. If each side is represented by its dumbest advocate, we'd be hard pressed to choose. But that's not the way it really is. Instead, we decide based on the strongest arguments and the best advocates, not the worst ones.


The Miracle of Testing
I look at this issue operationally: how would we check for stupidity and filter out the stupid from those who deserve to vote? We could reinstitute literacy tests and maybe add some math in there too. I don't think I object to that on principle, but I worry that once you institute a test, people start tinkering with it for other purposes, like winnowing out the voting pool. Also, what should the functional level actually be? I can see that basic reading comprehension at third grade level, but not a requirement for a higher level, like 10th grade. But I can see a lot of demagoguing that third grade or sixth grade is too low, and it should be higher. However, once you make it higher, you are definitely going to get bias effects.

These effects occur because the test authors are typically educated white middle class suburban college graduates, and they write questions that they can answer. Plenty of average or near-average inner city voters or rural voters might not pass such a test. Do we really want to disenfranchise those people? (I'm safe because I'm in the white-middle-class-suburban-college-graduate-demographic-who-will-write-the-test-questions, but occasionally I think about other people.)

If there is to be a minimal intelligence required to register to vote, then it better really be minimal, even frighteningly minimal. As I said before, the temptation to raise the standards would be present all the time, and it would be hard to continually resist it. Maybe that's why I think stupid voters should continue to be allowed to vote, because tinkering with this is an invitation onto a sure slippery slope. So let the stupid vote! It's easier than eliminating them and only them. 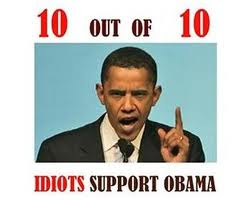 Posted by ModeratePoli at 9:46 PM