What's good about the new Romney

As Romney surged in the polls, I focused on the problems with him. That's unbalanced and unfair, so this post is a corrective. (I have noted some pluses along with the criticism.)

Romney's debate performance definitely resonated with some non-aligned voters. Here's what I think worked for him:

He planned it this way?

Another big question is whether Romney's surge was due to incredible luck or incredible strategy. He was certainly lucky that Obama was wooden in the debate, but Romney deserves credit for throwing Obama off-balance. That was brilliant.

Despite his shift in emphasis to more moderate stands, Romney hasn't lost support from the conservative media. That was a real hat-trick, because they've been leery of him for the entire campaign. Here is an analysis of Romney's timing from a thoughtful, observant conservative:


So why didn’t Romney shake his Etch-a-sketch, or make his “pivot” to the center, earlier in the campaign? The answer is that after many months of being viewed with suspicion by primary voters, he couldn’t afford to depress Republican enthusiasm in what was shaping up to be a base election.

If Romney had attempted a “Sister Souljah” moment during the summer, conservatives would have bludgeoned him for months leading up to the election. If he had done it at the Republican National Convention, he would have turned off party loyalists at the precise moment they were paying closest attention.

Now Romney is subtly signaling he’s not an ideologue at a time when even conservatives fear he could lose. And when it helped him win the first debate, the right was happier about his strong performance than they were concerned about any coming betrayals. It may be risky, but Romney didn’t have many choices.

The author sees what Romney's doing and still isn't angry at him. Frankly, that's a realistic view because at this point, it's Romney or another four years of Obama. That's a no-brainer for anyone who's close to being a conservative. But we also know that many political decisions are emotional, rather than logical. Has Romney managed to win the conservative hearts? That would be amazing. 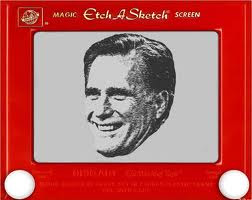 Image: copy of a copy


P.S. Have you noticed how I'm not writing about Obama at all? It's all Romney all the time. The major reason is that the media coverage is as superficial as ever--still no policy analysis. Sigh.
Posted by ModeratePoli at 11:00 PM

Well, I think you hit the nail on the head there, MP.

To anyone watching, it was obvious Romney was going to choose Debate 1 to leap to the middle and etch-a-sketch himself. That Obama's political team didn't see it coming and have the president prepared for it, with something like, "I thought I was going to be debating Mitt Romney tonight, but it sounds to me like he's decided to debate himself." Then he could go into how he's etch-a-sketched his prior positions from when he was "a severe conservative".

But they didn't and Obama wasn't ready and it is just another in a long string of political failures by his administration, good policies pursued or not. Romney is a better salesman, and he doesn't really care what he's selling as long as he gets is commission, which in this case is the big prize he's been training for all his life.

The Right knows they can run over him or, more, accurately, he'll just get out of the way and sell their agenda once they enact it. He's always just been after the prize.

So in Debate 2, Obama has to paint Romney as just a slick salesman, or better yet hope Romney does that himself (not likely), and remind people how he keeps the details hidden behind "principles" that are as fungible as what it takes to get what he wants. For example, he won't borrow money from China to fund PBS, but he will to give tax breaks to oil companies and the wealthy.

It's a hard task for Obama, but not impossible, particularly at a town hall-style debate. And Romney has already thrown all his punches. He can't leap to the center again and suddenly support the auto-industry bailout, and coverage for pre-existing conditions even if you DON'T already have insurance.