The only fan of the sequester

It's hard to be for the sequester if you're an elected official. After all, the sequester will send pink slips to somewhere around 600,000 employees in defense-related jobs, both in the Defense Department and Defense contractors. If you have a military base or a military contractor in your district, you can hardly support the sequester. So politicians don't express enthusiasm for it.

So who is this lonely fan of the sequester? Howard Dean, expressing his support from the safety of private citizenship with no official post in government or the Democratic Party. I loved some of the Dean quotes:


About defense cuts: "This is a chance to cut Pentagon spending. We haven’t done it for 30 years... This would not be my favorite timing. I don’t think this is a great solution. I just think it’s the better of any of the ones that are on the table... There are going to be some jobs lost. The fact of the matter is that we will not get this chance again."

About Medicare cuts: "I’m not in the least worried about Medicare provider cuts... Whether this comes from drug companies or provider cuts, we’re going to do those anyway as soon as they get around to doing what really has to be done, which is paying by the patient, not by the procedure." [Wow--how clear and how true]

About the risk of recession: "It will be a short term, light, small recession. Look, we’re in deep trouble financially in this country... You can pay me later or you can pay me now, but paying later is going to be much worse and it’s going to hit much more vulnerable people than this does."

The GOP is generally pro-sequester at this point because it's better than the other alternatives currently being floated. Those alternatives are objectionable because they contain tax increases and fewer spending cuts. However, the GOP can't be whole-hog supporters due to the military jobs in each district, as I said above. Some are trying to connect the sequester, and subsequent job losses, to Obama. The usual phrase is the sequester is "the president's idea."

I'm confident that the sequester will happen. I'm also a fan for reasons similar to those of Howard Dean, though I support broadly cutting jobs in the federal workforce, not just in defense. I also think we shouldn't miss this chance, and I'm willing to weather the consequences. Think of the sequester as the cuts we should have had in the 90's and the 00's, but didn't. We shouldn't put them off any longer, or it's "going to be much worse" as Dean says. 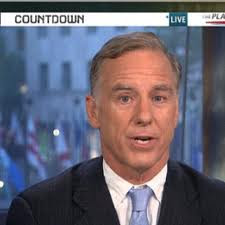 You, Howard Dean, a rump group of House GOP members and me, all in agreement. Strange times.

@truth, strange but interesting times. We all need to get together for a drink.

Sequester will happen. Sky will not fall. GOP will blame Obama for anything bad. Obama will blame the GOP for recession.

Nobody but ideologues will believe sequester wass Obama's idea. If it was, GOP would never have accepted it, duh.