Grand promise of "Get out the vote"

Getting your voters to the polls is the bane of many campaigns. The numbers (and wishful thinking) say you can win if you can turn out many more of your supporters while your opponent only does as well as last time.

It seems that every political faction uses this great hope to explain why they can win, but few actually deliver. Well, I'm tired of the argument. Mike Huckabee is the latest politician to reach for this argument. He's pulling it off the shelf as he tries to keep the GOP as socially conservative as possible, even after their losses in the 2012 election.

No dice, Mike. I don't believe you have an extra 6 million SoCon voters whom you can get to the polls. But more importantly, Allahpundit at HotAir runs the numbers casting doubt on this too (same link). He shows that the SoCons are voting in large numbers for the GOP candidate, those numbers haven't dropped, so a logical conclusion is that few SoCon voters are sitting it out.

Although I'd love to vanquish this type of argument for good, it's not easy to do. American elections typically have turnout of 60%, so large numbers of untapped voters definitely exist. That doesn't even include citizens who haven't registered to vote but would be eligible.

Obama is the only candidate I know who has actually succeeded in greatly increasing his votes through registration and GOTV efforts. There's always been more potential among Democratic constituencies for higher turnout, but Obama turned the potential into actuality where others haven't been able to. However, he's not going to hand his secrets or his organization over to the Democratic Party as a whole.

This doesn't bother me at all. If he's the one who built the machine and knows how to drive it, he should be the driver. It's all too likely that no one else can keep his machine in working order. Anyone who owns a Rolls would be crazy asking me to fix it, and lots of Dems are less savvy than I am, even the ones who've gotten elected. So, Mr. Obama, hang on to those keys. I hope you can keep your machine polished and in good working order. If others want to repeat your success, let them built a machine themselves. 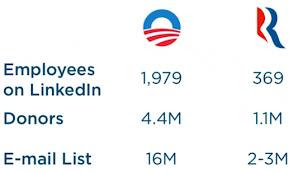 Extras. Other views on why the GOP lost:

Posted by ModeratePoli at 9:47 PM

This is another canard that cuts equally against the Dems and the GOP, as the Dems where I live employ it all the time to pump up the troops for, probably, hopeless campaigns, particularly for more local elections when the GOP romps.

Circumstances and messages drive turnout. If people care about the outcome, they vote, probably based on their affiliations or ideology. Otherwise, at primary and off-year elections, only activists turn out to vote.

The other myth is that the presidential election of 2012 of "close". A 4.7 million vote difference does not qualify as close. Given the circumstances it was a blowout. It demonstrates even more so that 2008 was a landslide. The Dems and President Obama should have treated it as such.

Per these certified results, the difference in the vote total was even higher--4.97 million votes, or 3.8% difference.

It's unfortunate but unavoidable that it takes a while to count all the votes, and Obama's margin grew as all the votes were counted. If I remember correctly, the margin on election night was 2-3%. The final results are show a distinctly stronger win. I have a pet peeve with conservatives who don't acknowledge the size of the win and quote outdated info.