Oddities in the Boston Bombing

I can't wait until the FBI starts releasing information from the computers of the Tsarnaev brothers. Because right now their motivation defies my ability to understand. On the surface, you can say that it's jihad. Leaving it at that level of detail isn't particularly satisfying because it doesn't help us understand why these guys and not the other immigrants and refugees who also happen to be Muslims.

If Tamorlan hated Americans, why did he marry an American girl? Why didn't having a baby girl with this American girl stop him from thinking it was OK to blow the legs off other regular American women and children? As I said, it's odd.

I think the logic of these bombers is going to defy reason even when the details are known. That's not unusual. Few people nail down their motivations with unimpeachable logic. I think the two most likely explanations are:
One explanation I think is unlikely is that they were an al Queda sleeper cell. They had good knowledge of Boston, but their explosives were below the standards of most bombings. They also seem not to have had organized support to get them out of town or out of the country. Their plan depended solely on not being identified. They might have gotten away with it because they did very much blend in with the backpack-carrying and cap-wearing young audience.

It's disappointing that these two men who lived in this country for 10 years gained no love for it. So many who come to the US do love it here. Others don't love it, but acknowledge definite superior aspects over their home country. I haven't known any immigrant who wanted to blow up a group of spectators.

Boy was I in a warm, fuzzy place, thinking that so many immigrants love the US. I don't really know that. I do know that many people harbor a lot of anger that gets directed at various targets, like schools, coworkers, the other political party, unfair bosses, the federal government, the prosecutor who humiliated them, illegals, the kids in the next hood, marxists succeeding at ruining this country, etc. I wonder that we don't have mass shootings and bombings every single day. But somehow we don't. Divine intervention, perhaps? 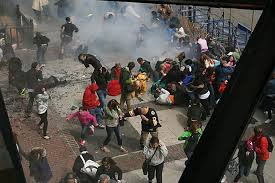 Posted by ModeratePoli at 2:07 PM

Most immigrants choose to come here. These bombers and other youngsters are brought here, probably with little thought about their opinion.

I've posited that these bombers are garden-variety random killers. Their initial target was a high-profile event so they could make a splash for their own personal reasons. If it was truly political or religious fervor, where's the message? It has all the trademarks of a "we;ll show you" outburst, which makes it a personal motive -- self-satisfaction -- no matter what they may say now.

I agree that there's a third possibility that this was mostly a thrill-killing, as you put it. Also, Thrill-killing most probably has anger as its root too. It may be very difficult to untangle all the anger threads here. However, I'm not ignoring early indications that at least the older brother had anger issues at his mosque.

Right. He wasn't very happy with Muslims, either. Sounds to me like someone mad at the world. He just happened to live near Boston.

You're right that there were two bombers and each would have his own motivations.

I don't know enough to agree that the younger "probably" just went along with the older. On the one hand, the younger brother ran over the older brother and rammed through a police blockade--that's very gutsy, and I wouldn't think it's typical "follower" behavior.

But there's also anecdotes about the older brother dominating his wife and his imam.

As I said, I'm looking forward to more definite info, not speculation, on motives. I hope there are writings/videos/etc in the apartment or on computers that will reveal this info.

But along with my curiosity, I also hope that the info will discourage imitators, not inspire them.