Jeff Flake, the new GOP senator from Arizona, wants to assure the country that the GOP is cool too. They are so cool and hip and wired in that someday they will have their own marriage-equality-supporting presidential nominee.

But it won't be him. Nope, he's just too vanilla, with his non-evolving belief in traditional marriage. But someday even the GOP will find someone hip enough to be cool with two dudes saying vows, but who is  still the fulfillment of conservative ideals.

Jeff Flake was one of the first Republicans to suggest how to pick up the pieces after the 2008 election. To me, he's a bit of a bellwether. If he's OK with being on the ticket with a same-sex-supporting candidate, that's great. Except for one problem: there's still only one nationally known GOP politician brave enough to take that stand--Rob Portman. Perhaps this is a signal to others in the GOP: step up if you're brave enough, and we promise not to hunt you down as a RINO.

That's all fine and good, but does the same forbearance apply to other policies too? Can you be non-stodgy on Planned Parenthood, on abortion, on Obamacare or a workable replacement, and still be part of the Grand Old Party? I have my doubts about how cool and modern a GOP politician can get without losing standing, but we'll see. 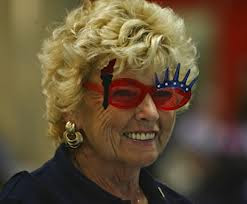 Just enough to get elected so they can do whatever they want.

Hey, I don't see any GOP-controlled legislature in any state suddenly seeing the light and deciding that same-sex couples' unions deserve equal recognition and equal protection under the law as "traditional" couples (like Hugh Hefner and his 20-something bride). The GOP position is entirely motivated by political considerations. Rob Portman has some cover to be a front-man and GOP example because he has a gay son. What other choice does he have be to accept a pervert in his family? For the rest of us, we're not going to allow acceptance of those perverts' marriages sully God's real purpose.

Please excuse the blunt translation of Sen. Flake's statements, but that level of hypocrisy disgusts me. The power base of the GOP would like nothing better than to outlaw homosexuality. But too many of their potential voters don't like that vicious streak in their preachiness -- blaming poor people, minorities and immigrants for economic trouble is more to their taste -- so they tone it down just enough to dog-whistle the base without alienating the rest of their potential 50.1%. Their own 2012 post-mortem said as much.

Expect no policy changes from the GOP for another 20 years.

What a killjoy you are to slaughter my bit of merriment. Please consider these other alternatives: Some of the politicians aren't bigots, and they'd like to be more open to gay people. They're finally getting to do that, and the party isn't immediately burning them at the stake. More and more of party members are following the lead of the rest of the country and seeing that gays aren't threatening in any way, including to the institution of marriage.

Maybe you're right that the GOP won't actually change for 20 years, but I think the change will be faster than 5 presidential terms. The GOP will have to adapt or die, so they'll probably try to adapt.

Dick Cheney supports same-sex marriage because he has a gay daughter. But that didn't stop the GOP, wherever they had sway, from stomping on the throats and hopes of same-sex couples for recognition. Nope. They rammed through state constitutional amendments or laws specifically denying them ANY recognition, now and forever. I don't recall Dick Cheney trying to stop it. Instead, they used it to get re-election via Ohio in 2004.

Not that the Dems have been profiles in courage on the issue. The Clintons used DOMA as values-voters cover in 1996. President Obama was slow to voice what I hope were his true thoughts on the matter.

It all derives from the general public's view that homosexuality is perverted, disgusting or both, even if they have no personal negative thoughts toward the people who engage in it. Many GOPers may push anti-equality laws and policies to serve their political interests, but privately don't care one way or the other. I might think that of someone like George W. or Rob Portman or even John Boehner, despite their respective pronouncements. They hide behind the "I believe in traditional marriage" cop out, just as the Dems did before them.

Because it's now a political loser, they just don't want to talk about it. I'm guessing, however, that Sen. Flake and most of his current compatriots long for the day when they could use the issue as a political cudgel against the Dems, whether they think gays are sinners (probably accurate) or not.

For 50 years the GOP has been building this branding. "Family values" replaced "communist" in their vernacular, so most of the politicians that get elected are true believers. They hide it for political or personal reasons, but the cop-out is the tell. "I believe" is code for being on the side of GOD, for you people where opposition matters. I'll do all I can to make sure gays aren't treated equally, but you have to turn out in big numbers on election day because although I hate gays as much as you, I can't say that since then I'll lose the rest of the people I need to vote for me so I can secure the barricades we've erected together.

So don't kid yourself and sorry if I ruined your attempt for whimsey. There's not a single GOP elected person who will aggressively advocate to overturn established marriage-equality restrictions. If they were to do so, the GOP base WOULD hunt them down like a RINO. In a primary, they would find a true believer to replace them -- as they've been doing for 50 years now -- or let the seat go to the Dems. This is not and has never been a compromise position for them.

Rob Portman can say he favors marriage equality because he has a gay son. If he advocated for Ohio or the country to change the law to recognize same-sex marriage, however, he would not get another term.

1) and 2) are indisputably and demonstrably true. Hence, the only reason for 3) can be bigotry, politically or religiously motivated, or both. Anyone still defending it is a bigot either way.

In your harshness, you make some good arguments. You are right that the GOP used gay rights to stoke voter turnout, and would do it again if it was helpful to them.

But I don't think that clock can be turned back. There is no Taliban here to reimpose the old traditions.

I agree that the GOP aren't going to be the ones pushing to overturn the same-sex marriage bans where they exist, but they can stand down in their opposition, and gradually it will happen.

It will certainly be worth watching what happens in the next 10 years to GOP positions on same-sex marriage and other gay rights issues. We'll also see how Ohio treats Rob Portman. You seem certain that he'll lose in a primary against an anti-gay challenger. I'm not certain what will happen. I'm happy to let events play out to show who had the better prediction.

Portman is likely safe from a GOP challenge, because his son is gay. That's as far as the GOP base will allow a politician to go. If he were to advocate to actually remove the restrictions, however, that would go too far. Portman is safe because he doesn't have to actually vote on this from his spot in the Senate. He has no say in Ohio law, and the Supremes will get to decide on DOMA. So he can say he's for same-sex marriage, but that's not relevant to his position in the GOP.

The simple fact is that same-sex marriage has existing FOR DECADES, if not longer. Gays have held ceremonies, consented to live as spouses, and done everything in their power to make the marriage a reality. The debate isn't about "allowing" same-sex marriage, although the conversation and the media short-hand report it that way. The debate is about state recognition of the consensual contractual arrangement called marriage. Boil it down to that and nobody can offer a non-bigoted basis to deny state-recognition.

I'm not in this circumstance now, but if my situation is different in 15 or 20 years (if not sooner), I would certainly like the opportunity to form a consensual contractual arrangement of marriage with a man, having nothing to do with sexual orientation. And that union should have equal protection with any other consensual union, no matter the genders of the parties. I may not call it "married", but I might describe it as a civil union or whatever. I'd love to see that happen, and I expect it will some day.

A revolution is what is deemed "marriage" for civil purposes would be a great thing for this country. It would show we have grown up a little -- make that A LOT.

Now if we could jsut bring our well-behaved dogs to more places, we may be getting somewhere.