As the GOP scrambles to reinvent itself without losing its base, we can all expect some entertaining moments. Here's something to watch for: the RNCC is going to create a BuzzFeed-style site that will be filled with youth-oriented political propaganda memes.

I suppose that if you could find some smart, funny, young conservatives with an edgy sense of humor, it could work... except for the censorship that will almost inevitably occur and will turn the site into stale, over-salted popcorn.

I don't know whether internet memes were influential in the 2012 election or not. This post (from the hard news outlet of the Cheezburger network) tracks a bunch of memes, capturing many fun moments of the campaign. I tried to read the article, but the images are so snappy and distracting, I couldn't follow the narrative. I had the same problem with this article from The Verge, a site that's new to me. I'm left in this situation: "You're so pretty, now what did you say?"

There were a few clues to understanding memes buried deep in this dialogue/post (skip down to the "Buzzfeed effect" right above the Mordor meme.) 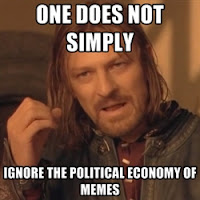 "Consider the Buzzfeed effect, a term I just made up: in the wake of major cultural events, for example the Presidential debates, you have a nest of insanely influential organizations acting as ex post facto gatekeepers who have the power to make a meme by saying that something IS a meme... Specific moments are turned into GIFs, which then spread through the online ecosystem and end up representing/becoming emblematic of entire speeches/ debates/ events. ...the political leanings of the GIF creators become a factor, because their personal preferences are "encoded" ... into the GIFs they're making—for example, choosing moments that are more flattering to Biden than to Ryan, or cutting the frames in a way that makes Obama look imperious."

Sorry, everyone, but this is new to me. I usually get my news via NPR, a bit of TV, a lot of internet verbiage, and as little video as possible. I don't aim  for the '2 screen experience' where I'm watching the debate and following what's trending at the same time. However, my sweetie is quite the twitter-fiend who keeps me informed. I remembered screwing up my face at the "binder full of women" comment. Within 5 minutes, my sweetie was reading me twitter jokes about it. So maybe it's not completely unknown to me.

What does this mean? I don't know. The picture right below keeps erupting into flame. How am I supposed to be able to come to a logical conclusion? Aaaaagggghhhh!

Maybe I now understand why the GOP cares about this stuff and why they hope to have a better plan for the next election. However, I doubt that you can cover up lies, bad policies, and lack of honesty with some clever graphics. Whatever you try to hide, it ain't going to stay hidden. I think and hope that's the lesson from the raging internet inferno.

Posted by ModeratePoli at 12:25 AM