What's the story on Miranda rights?

OK, I'm a couple days late on this, but I had an interesting realization that I want to share. If I'm just slow, you don't have to spare my feelings.

My first reaction to the Miranda rights complaints concerning the Boston bomber was:


"Of course he already knows his Miranda rights. There's no loss in reading them to him."

Sometime on Saturday or Sunday I finally realized that the issue isn't just informing him of his rights. It's an issue of respecting his Miranda rights. Luckily, there's the public safety exception (dating from 1980), so the police can question him without violating due process.

But I got to thinking, how often are the rights violated anyway? I'm pretty sure I've read about cases of suspects refusing to talk, asking for lawyers, and the police ignore it and continue questioning them.

So what would the FBI (if they're in charge) do if Tsarnaev invoked his rights? Would they just continue questioning him? Under the exception, they could, and I think that's fair. But what if he still refused to talk? How far would they go in disrespecting his rights?

Here's what I'm guessing: When Lindsay Graham says the bomber shouldn't be read his Miranda rights, what he really means if that the interrogation can and should proceed with no protections at all. Days-long interrogation--fine. Sleep deprivation--fine. No lawyer--that's a no-brainer. A beat-down--sure, if he's not talking. Water-boarding--maybe Graham is fine with that too. Torture--that's OK as long as you call it "enhanced interrogation." 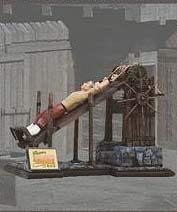 Posted by ModeratePoli at 9:35 PM

Rarely are my comments so succinct. But, yes. Bravo.