The negotiations on fiscal cliff are limited to two people--President Obama and Speaker Boehner. Thanks be to God!

The last thing we need is a lot of Congress people thinking they'll have an outsized voice on this. They don't have a special insight into the will of the people, though many of them are claiming to. It's torture watching the Sunday morning talk shows (mercifully shortened here).

Sen. Tom Coburn (R-Oklahoma) says he'd vote to raise taxes if there was significant progress on entitlement reform. It's good higher taxes are on his radar because they're coming no matter how he and the rest of the Senate vote.

Over on CNN, a reality-based Republican (Tom Cole) is sounding sensible because he wants to pass what both sides agree on--keeping the tax rates for the lower 98%. Meanwhile, Marsha Blackburn seems to think she'll have a chance to vote to keep all the tax cuts. She won't.

Despite lingering anger or cluelessness, whispers of rebellion against Boehner subsided (after peaking on Dec. 6). Enough GOP reps have realized that they'll just have to trust him to make the best deal he can. Holding the tax rates on the middle class as hostage isn't going to work since Obama is itching to call that bluff (despite Marsha Blackburn) and see the blame rain down on the GOP.

Boehner still has the threat of shutting down government over the debt ceiling or appropriation bills. Rather, his caucus wields that threat, and they might very well use it if Obama gives them nothing. (If Obama gives nothing, the blame will quickly switch direction to rain on him.) So there is strong incentive on both sides to negotiate.

The biggest problem for the GOP is its pride in not compromising for 99% of four years. That's a hard habit to break. So it's good that they have one designated negotiator to make those hard decisions, and do what the rest of the GOP can't. It shows that there is not always strength in numbers. More particularly, there isn't always wisdom in a crowd.

The Dems kept pretty quiet during the campaign and didn't jinx themselves with the usual moral blather about our duty to [expensively] take care of society's ills. Will they be able to keep quiet when the deal isn't as advantageous as they had hoped as the election returns rolled in? I certainly hope so. The memory of the flogging in 2010 of overreaching Democrats should be fresh enough that they don't need too much of a reminder.

So, I say, let Obama and Boehner hash it out. Run all the rest of the cooks out of the kitchen, close the door, and see what kind of sausage they make. It can't be worse than the freaking awful dreck Congress would serve up if more of them were involved. 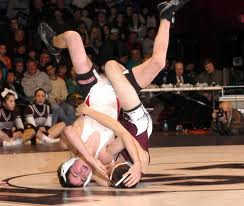 Putting their heads together
Image: draftdaysuit.com
Posted by ModeratePoli at 12:15 AM

I wish I had your optimism, MP.

We are at the so called cliff at the last second once again because last year we made a deal at the last second that put all this in place unless action was taken sooner. It wasn't and it will never be in any other way until there is a credible threat of something else happening.

Instead, if this deadline is avoided, the same voices clamoring that something must be done now in order to avoid consequences will be back at it come the debt ceiling or the appropriations bills that you say will be the next failsafe. The story is always the same: just extend / take this deal so we can sit down and work it out without the threat of X looming over us.

Maybe at that next failsafe, you might recognize the pattern and wash your hands of kicking the can further, but too many others will readily pick up the cause of holding the football still for our young Charlie Brown. :/

The above said, I hope Boehner is able to craft an agreement with Obama away from cameras and plan leaks and then makes a case for it to the GOP Conference.

I am watching Jeb Hensarling for early evidence of any white smoke.

You've written before that we're facing this "fiscal cliff" because "last year we made a deal at the last second that put all this in place."

It's an overstatement that all of this is due to the debt deal last year. Some of this was baked into the Bush tax cuts (their sunset provision), some due to their renewal under time crunch, and some is just regular time pressure that we've always had to get the appropriation bills done before legal spending authority lapses.

It might be great if it all went in an orderly fashion, but it's not likely most of the time.

As for kicking the can down the road, the Aug '11 deal was better than most, since it did something then. Compare to the Dec '10 deal that left spending high and added to the deficit (though the economy was more wobbly then too).

Now I have a question for you. Why is Hensarling a weather vane?

One other comment: I like sunset provisions and mandatory review points. I hope to see more of them. But that means more of this hard deadlines. Do you approve?

MP - yes, it was from more than just the debt ceiling deal. You can add the payroll tax extension and, as you say, the Bush rate extension - all of which were last year (OK, the Bush extension missed by 13 days; my bad).

In theory I like sunsets and review provisions, but they can be avoided as easy as anything else. We are seeing that now with all of the talk of undoing the sequester. So, they have little practical value.

As for Hensarling, he is more thoughtful than he can come off and the other Conservatives listen to him. To me, he'll signal the path of all this and what the true fiscal worriers will want to in exchange for a tax deal.

First, there is no "tax deal" to be had. Obama won that argue and all he has to do is wait for Jan 1 and he wins that. The GOP can't hold the tax cuts for 98% (actually, 100% since it's bracketed) hostage for anything because everyone knows they have to support them. Obama, correctly, should not give them anything of value simply to agree to the inevitable.

While there is something in GOP lawmakers actually agreeing to increase rates, I doubt many will if it comes to a vote so they can preserve their only long-term policy point. Further, there's nothing the GOP wants that they can win politically, so we are just waiting now for the GOP surrender. If Obama offers any deal that the majority of GOP lawmakers will accept , he's screwed up and will lose Dems.

Please share: What, if anything, does the GOP want in these negotiations that they could win politically? I can't think of anything. Let's see.

1) Prevent deep defense cuts. Nope.
2) Maintain Bush tax rates for high earners. Nope.
3) Use debt-ceiling as leverage. Nope. (At least beyond the leverage they have to take the truly country off a cliff.)
4) Cuts to entitlements. Nope.
5) Kill/weaken Obamacare. Nope. (They might have gotten that before the election, but not now.)

All the GOP has now in negotiations is hostage taking that hurts them politically far more than the Dems. They lost. Time to accept it.

Anon at 3:29 - I don't think you understand the BANTA of the Tea Party Caucus in the House or what winning the debt ceiling (your 3rd possibility) would look like to them.

Further, perhaps Obama has won. But the many swing district D House members and in cycle D Senators don't feel that way about letting all taxes go up - especially when lower earners realize that the reversal of the Bush cuts hurt them the most. Don't you think some of them will begin to question the bullshit they have been fed for 12 years about how the rich made off with the loot from those same cuts?