I AM SICK OF the one-size-fits-all solutions from different factions in the gun debate.

Some people are so pro-gun and so angry about the tiniest regulations that they have one solution--MORE GUNS. No gun-free zones. Many more people carrying guns all the time.

Some people are so anti-gun that they think all private ownership of guns should be outlawed. They ignore certain facts about this country: some people hunt with guns, many criminals won't give up their guns, but would love for potential victims to be unarmed, and culturally many Americans consider it their right to own guns for self-protection.

On both sides, idealistic visions for this country cloud realistic thinking.
To everyone, when you think you have a solution to the problem of mass shootings, please subject it to a reality test. Gather some relevant data, such a polling on gun ownership or accounts of armed citizens at  shootings, and ask yourself whether your idea has a snowball's chance in hell of working.

By the way, I've read only a few comments from people who want to ban all private gun ownership. However, I've seen too many people, including the leaders of the NRA, who think more guns everywhere are a solution to the problem of mass shootings. The pro-gun dreamers are definitely more numerous than the anti-gun dreamers, so there isn't exactly equal hypocrisy on both sides. 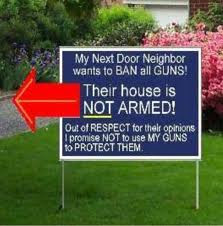 More guns, in the right hands, do help to protect society. The Fall River public schools put police officers in every school after the CT shooting. A lot of schools already had an armed police presence. I’m not sure it’s worth the expense to do this in every school, but I don’t think it’s a crazy idea either. Guns don’t magically protect us from getting hurt, but their public presence does make us safer, imho.

I don’t think most gun control advocates want to ban handguns, but they do want to ban removable magazines and anything else that could be used to quickly load a firearm. It’s the same as the idea of limiting the capacity of magazines -- to prevent an individual from spraying a lot of lead in a short period of time. Even the assault weapons ban prevents most full-sized 9mm pistols from being used with the standard magazines they were designed for.

@Couves, I agree that more guns in the right hands do help, but extending concealed-carry to too many people would reverse that. As I wrote in the concealed-carry post, there's a good standard in some states that weeds out most of the blowhards who wouldn't put up with the training and fingerprinting. I'm happy to see those weeded out.

I think the involvement of local law enforcement is generally a good idea because they do tend to know who's a hot head and who's never caused any trouble. I don't want to sacrifice that filter.

I think restrictions on magazines, if they are enacted (still a long shot), can take into consideration what is standard for different guns. But we can also move manufacturers in a particular direction.

As I commented in the other post, even with Florida's permissive concealed carry laws, very few bad guys get their hands on these permits. Giving law enforcement the ability to arbitrarily deny permits is a solution to a problem that doesn't exist. Many responsible gun owners are denied permits in this state, just because they happen to live in a city.

The new Federal gun control legislation I've seen does not make any allowance for handguns with more than ten rounds.

@couves,
While I have sympathy for your situation if you've been denied a permit you deserve, I prefer solutions to actually address the problem. If your local police don't give permits, make an issue of it as often as you can. I don't support removing their discretion because that removes a useful tool in making sure guns don't end up in the wrong hands.

Address what problem? In Florida, Police don't have this extraordinary power, and in almost 25 years, with over 1.8 million permits issued, only 168 permit-holders have used a gun in a crime. You're trying to solve a problem that doesn't exist.

The problem you have is that the local police chief misuses his power. If he didn't, what problem would you have with the fact that a person in law enforcement, who presumably knows the local questionable characters, had to sign off?

As for Florida, I've read that they have changed some of their procedures, so I have some concerns. However, it's not something I want to spend more time researching.

I hope we can respectfully disagree on this. I doubt you can change my mind or vice versa since we both have clearly stated our preferences and reasons.

MP, this is not an isolated case of misusing power -- it’s systemic, including most urban areas in Massachusetts. The red and orange municipalities on this map deny most applications for concealed carry permits (LTC Class A, No Restrictions) to qualified applicants:
http://keiiken.net/images/macitytowngun.png

I don’t have any problem giving powers to the government that are beneficial and exercised responsibly. This law is neither, although it was passed with good intentions. You could probably write a law that at least made permit denials an exception rather than the rule. It sounds like you might be ok with that.

@Couves, yes, I totally agree that denying a person a permit shouldn't arbitrary, nor should it be across the board. There should be a definite reason of unfitness, lack of essential training, history of poor temperament, that sort of reason.

If you know of any legislative push, please let me know. I'll write to my state reps in support.

It's nice to end the year on a note of agreement. I'm not sure anything like this is plausible in the foreseeable future -- but a potential compromise could be sweetened (for those who want more gun control) by requiring people who want to carry concealed to get special training (as it is, they get the same basic firearms safety course as everyone else). I have little doubt that the local NRA group would agree to this.

I don't think the changes will go too far. The majority in this country hasn't been for gun bans, which is why they took hold in only some cities and states. I hope the majority is for trying some sane approaches to reducing wide open access, and I hope gun owners are sobered by the latest killings and how it happened due to own negligence. Happy new year to you, Couves.

Thanks, MP -- Happy New Year to you as well.

Ok, news is moving fast, but I thought this would interest you:

Apparently, a hot new idea is to require gun owners to purchase insurance. As my local NPR explained it, the idea seems to be that people more likely to commit crime will have higher premiums, and so they'll find it prohibitively expensive to buy the insurance. Basically, a poll tax for the second amendment. Of course, a license can already be denied outright if a Chief of Police has concerns about the individual.

@Couves, I've haven't got much time to answer or read the link right now, but here's something you might enjoy: